Serendipitous pairings of readings are lovely. Or perhaps they are normal. Which does not contradict. Years ago I met a fellow who, rather than going to university, decided to spend a year reading the classics. His girlfriend, with whom he lived, had a job, so he didn’t need to do anything else. It was the former East Germany, probably some time in the early 1980s. He spent the year reading Schopenhauer and Nietzsche, Hegel and Rilke and Schiller and the rest. Sleep in, read all day, go to a bar in the evening to discuss. Repeat. After a few months, he had a feeling of levitation; all these books were speaking to each other in his understanding, they were all interconnected with references and resonances, similarities and synchronicities. This is what an understanding of “The Canon” could be like.

Sometimes the same feeling emerges with books today, where they are resonating with one another, wobbling each end of the same piece of string. Two that arrived in close temporal proximity were the The Climate Cure; Solving the Climate Emergency in the Era of COVID-19 by Tim Flannery, and the The Ministry for the Future by Kim Stanley Robinson. The first is an astute and detailed discussion of the way that the way that various governments dealt with the COVID emergency over the year 2020 could be used to inspire ways to deal with the climate emergency that is ongoing. The second is an imagination of an organisation, the eponymous Ministry for the Future, that is created by the UN to deal with the climate emergency. The first is suggested policy, the second speculative fiction. The first is written by a renowned scientist, the second by a well known science fiction author. Both authors like a walk in the wilderness.

Both texts use a crisis as a starting point. Tim Flannery’s book uses the COVID crisis, Robinson uses a mega-heatwave that kills tens of millions. Both talk about geoengineering and carbon sequestration. About winners and losers, about justice and about what can be done. Flannery makes a bunch of well founded suggestions as to what can be done in order to avert climate disaster. Written very much in the present, he calls for action to to taken very soon in order to have a positive effect in the near future. Robinson takes a very different perspective. Written as a collection of more or less first person accounts by a wide range of characters in a possible near future, the story unfolds without any idea of what the guiding top level policy would be. There are terrorist groups, rogue geoengineering efforts by nation states, implied black ops funding and secret mountainous meeting rooms. There are people losing their minds, people finding love, and all the spectra of human experience beside the perspectives from several decidedly non-human points of view.

If we were looking at a futuring exercise process design, we would think that Flannery has done the hard work to develop a very well conceived plan based on the setting of what we as global society but also the nation of Australia, need to do. It is a very well developed scenario. Robinson has taken that scenario, or rather, a related but different one that he has developed himself, and worked out some of the narratives in that scenario. We would say that he has developed his scenario into a complex Storyworld, a collection of Characters and Characteristics, Components and Challenges, along with a few Contradictions and Conundrums, in order to portray a story of what it might be like to live in that world. As the New Yorker writes, it is as though Robinson has written a story that imagines what happens if we get it right.

Narratives have become one of the recent focus points of futures thinking. Peter von Stackelberg and others have used the ideas around science fiction worlds and narratives, as well as game narratology and many other elements, to discuss a transmedia storytelling that investigates future scenarios. The Mundane Science Fiction Manifesto as well as many others have looked at what can be done to take narratives in science fiction away from the heroic and into the mundane, in many ways, in order to investigate the nitty gritty and the subjective experience of living in a near future world.

Our work melds this with Candy and Dunagan’s concepts of Experiential Futures. We build physical narratives, immersive physical spaces that create the context for visitors to the space to explore a storyworld. Previous storyworlds have been multigenerational tales of flight and escape, the refugee situation in the Mediterranean or just a good old bank robbery (with a twist). We have hybridised Futures Thinking onto this practice, in particular the ideas around experiential futures, which make most sense in the context of the work that we do.

Thus it was clear that we needed to graft another layer into the Experiential Futures Ladder that Candy and Dunagan developed in order to explain and analyse their and other people’s work. Between the Scenario with all its abstracted details and bullet points, and the Situation with its spatial specificity, we insert a layer of Storyworld. Who lives here, what are their histories, where have they emerged from in the development of the scenario as it evolved from what we know today.

As we developed Turnton and all its fragments, we have read many such books and papers such as that from Flannery. Well researched ideas about how certain elements of the world need to be developed in order to maximise the likelihood of human societal survival, to increase social well being, to enhance equality and fairness. These have been put through a complex and organic process of mashing together in order to arrive at a scenario that could not be so clearly stated as Flannery’s. For like the friend in East Germany, we are realising that all of these texts and ideas resonate with one another in nonlinear and nonlocal ways, unexpected synergies and synchronicities between ideas and inspirations and recommendations and research. The world as a scenario starts to levitate, a Latour-esque Actor Network. Luckily we do not have to hold all of this in any one mind, with the scores of contributors to the Turnton worlds that have all brought their ideas in to enhance the story world in a wonderfully co-authored way. While the (Extended) Experiential Futures Ladder indicates a certain linearity to the process of creating an experiential future object or space, the process is of course very mixed up, with some aspects of the stuff only finding their storyworld meaning after a long process of developing the details of the situation or the scenario. It is nevertheless a great way to help one think about what one is doing when developing an experiential future. We do not foist it upon our co-authors; rather we use it occasionally as a way to check what we think we are doing.

As Robinson said: “We are all living in a science fiction novel we are coauthoring together.” Around 200 people have helped created the series of fragments of the Tunrton world that we have exhibited in several phases over the past 5 years. Each one of them is some kind of co-author. In the real world it is no different. From research scientist Flannery to the Vietnamese market gardener down the road, we are all creating our future together. 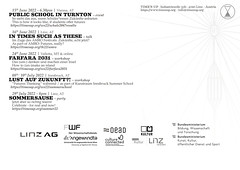 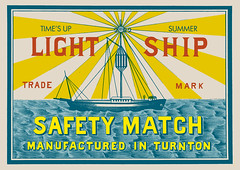 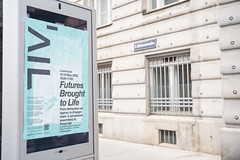