Since its very beginning Time’s Up maintains an analogue version of a “Loose Diary” which tries to keep, in a rather loose (as the title already implies) manner, track on what is going on in / outside / around our laboratory.

When we had almost 20-years on our shoulders, the analogue version turned in a rather extensive compilation. We definitely won’t digitize it (or at least not before we retire, or some “outsider of Time’s Up” decides it would be a good idea digitizing it). But we decided to establish an online-version of it (starting in November 2013).

Maybe there is someone out, who will be enjoying peeking behind the curtain of Time’s Up.

Time’s Up – Laboratory for the construction of experimental situations.

Founded in 1996, Time’s Up has its principal locus in the Linz harbour of Austria. Its mission is to investigate the ways in which people interact with and explore their physical surroundings as a complete context, discovering, learning and communicating as they do.

Thus our research is based upon constructing interactive situations not unlike the normal physical world, inviting an audience into them and encouraging their playful experience-driven exploration of the space and its behaviours, alone and in groups. In this research process we use tools from the arts and design, mathematics, science and technology as well as sociology and cultural studies.

Our goals are to collaboratively investigate the world and its options with a general public, communicating and discussing these discoveries through workshops, publications, teaching and symposia. 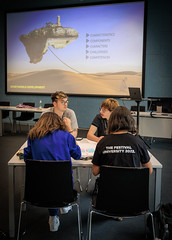