We follow a lot of things that may or may not appear to be coherently tied to imaginations of possible futures and our artistic practices. However as John Muir, one of the early ecologists at the end of the 19th century wrote, “When we try to pick out anything by itself, we find it hitched to everything else in the Universe.” Ecologies are interconnected. Societies are. Only the most arcane systems in scientific laboratories allow us to separate things enough to perform experiments with a degree of reproducability. This is of value, but it might mean that the applicability of our results are limited, in the same way that the disconnected model of Adam Smith’s invisible hand finding optimal prices is barely useful in the real world.

One of the focal areas of our work on the Turnton world, but also Hydropia, Lore and Law of the Sea, Control of the Commons, Mind the Map and others, is the interconnected systems of ecology, law, tradition and technology that permeate the seas. So we find ourselves talking about migration, the IMO regulations on pollution, the fecundity of liminal mangroves and centuries old seaweed farming practices in a single conversation, without any great contextual jumps. This is lovely, but somewhat overwhelming, as the seas remain a wilderness with no national laws, the source of around 50% of our oxygen, a place of slavery and the conduit for global trade.

When we were younger, we were told that black diesel smoke was not problematic, and many of us continue to consume it coating the tea leaves that have been sun dried on the side of roads in the tea producing countries around the world. However we have come to realise that the microparticulates that make up black smoke are toxic. As are the sulphurous fumes that we used to smell and the lead that was added to petrol to help it burn better in internal cumbustion engines. On land, in many countries, we have stopped using leaded fuel, we have strong restrictions on the suplur content of diesel and we no longer regard the cloud of black smoke belching from a truck exhaust as a sign of power, but rather a sign of bad driving or bad maintenance. The oceans are different. We see container ships steaming into the distance with black smoke belching from the smokestacks. The levels of sulphur allowed in marine fuel is a multiple of what is allowed for trucks on land. Not to mention the vanadium and other heavy metals that are in ship’s fuel oil.

In 2020 the International Maritime Organisation (IMO), am organisation that is allied with the United Nations but is independent, implemented a sulphur cap. Reducing the level of allowed suphur in ships fuel from 3.5% to 0.5% was intended to lower the effects of acidic condensate. Less sulphur in the fuel means less sulphur oxides (SOx) in the exhaust smoke. However the IMO decided to allow the removal of SOx by another means as well: scrubbing. The idea was, we can either stop the sulphur being burnt, or we can collect SOx from the exhaust. A bit like Carbon Capture instead of fossil fuel reduction. A closed loop scrubber, in principle, collects the SOx from the exhaust and stores them for disposal on shore. Strangely enough, this toxic waste water is hard to deal with. Another option is the open loop system, where the SOx is washed out of the exhaust and disposed of directly into the ocean.

As we have been disposing of rubbish into the ocean for centuries, this is understandable a natural thought pattern. Much as we know we are overreaching the ocean’s ability to absorb our wastes, destroying the capacity of the oceans to recover. However the idea of taking an atmospheric pollutant and turning it into a water pollutant does not seem to be an actual solution. In a webinar organised by the Clean Arctic Alliance on the 6th of December, maritime science professor Ida-Maja Hassellöv shared some of her results around the effects of open loop scrubbers.

It does not take a very close look to see that scrubbers are causing a significant pollution problem in the Baltic. In fact it takes a close look to realise that there are other sources of pollution in the diagram.

One of the phrases that gets thrown around in our circles is that of futures literacy. There are various ideas about how to speak about what futures literacy might mean; we tend to use the phrase “thinking out loud about possible futures” in order to describe our take. Not only do we need to think about what might happen, but we need to discuss it with one another. This process of discussion, exchange, co-development and thinking together is powerful. Who would have thought that taking an atmospheric pollutant and dumping it in the sea would have caused a problem? Well, clearly no one that the IMO was listening to. They were clearly not thinking out loud enough about possible futures,

Law professor Aldo Chircop commented that it is clear from existing law that this idea should not have been allowed. The United Nations Convention on the Law of the Sea expressly forbids the transfer of one kind of pollution into another (article 195). So not only does a form of futures literacy indicate that it would have been a bad idea to dump scrubber waste into the ocean, but existing international law also makes it clear.

These sort of events are sometimes depressing, sometimes inspiring, but usually interesting. We are not part of these discussions, but we pay attention to what is being talked about and what is happening because it informs the ways that we and our environment (whether social, technological, economic, ecological or political) is changing. We focus on imaginations of what could happen and ways in which people, in their everyday life, can respond to what is happening. When well-paid and powerful international negotiators are unable to apply futures thinking, then perhaps it is up to those outside their halls of power to do so. By letting the ideas and implications bubble up, advocacy and awareness is rising, and action can be taken. Our work is not about simply raising awareness of issues; there is more than enough of that. As Jacques Servin of the Yes Men said in his presentation at the Futures Brought to Life symposium in May, our job is becoming one of inspiring change not only with awareness raising, but by creating positive visions of the future. While the Turnton storyworld is not a utopia, it includes many positive adaptations of society to emerging issues that we are currently aware of. Talking about the oceans, Turnton has imagined and imaged clean cargo, regenerative coastal ecosystem practices, ship noise minimisation, algal bloom adaptations and many more elements.

Another graphic from Ida-Maja Hassellöv that attracted our attention was the following explanation of the various forms of pollution that arise from ships.

Of the pollution sources that are listed here, a quick analysis indicates that half of them are missing or minimal for sail powered cargo transport. Sailing vessels do not move fast enough for them to strike a whale, there is little or no no tank cleaning, cooling water, scrubber water, engine noise, prop shaft lubricants, atmospheric deposition or significant turbulence, wash or erosion. As we begin to realise the costs of fossil fuel driven mass cargo transport, perhaps we will begin to realise that these costs are too high.

Speculation and Futures Literacies are not just about entertaining thoughts, but to follow on from Paul Graham Raven, they are about creating Futures Agency. As individuals, groups, communities and society, thinking about the sort of world we want to live in can and should enable us to move towards that world in a more coherent way.

This research is part of Curiouser and Curiouser, cried Alice: Rebuilding Janus from Cassandra and Pollyanna (CCA), an art-based research project of Design Investigations (ID2) at the University of Applied Arts Vienna and Time’s Up, supported by the Programme for Arts-based Research (PEEK) on the part of the Austrian Science Fund (FWF): AR561. All Time’s Up activities are also kindly supported by Bundesministerium Kunst, Kultur, öffentlicher Dienst und Sport BMKOES, Linz Kultur, Land OÖ & Linz AG. 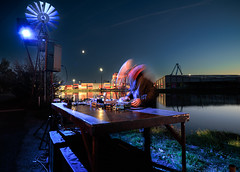 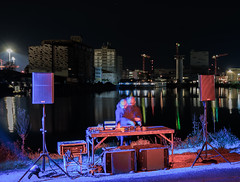